1925
The Wettenhalls' story can be traced back almost a century ... to a young man, Reginald Amezdroz, who is working at the time as a cream tester and boiler attendant at Bulla Dairy in Colac. Bulla’s perishable products need to be freighted to Melbourne each day and the company is looking for someone with a truck to do the delivery ... 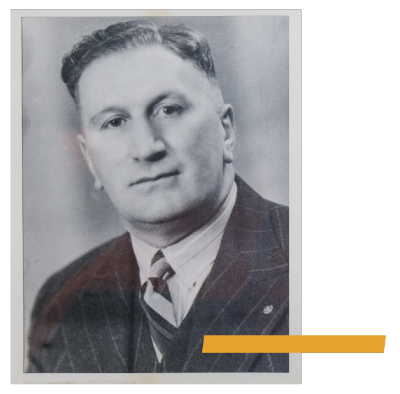 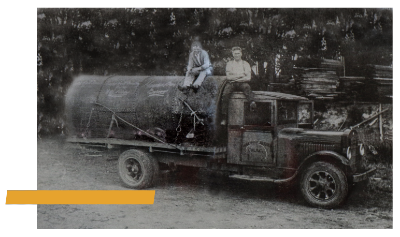 1926
So Reg steps forward and says he’ll do the job. This is the first truck he uses for the daily delivery of Bulla cream to Melbourne (with Reg seated on the right). His first load is 29 steel cans of cream, around 1500 litres in all. Because the vehicle isn’t refrigerated – the produce is kept cool with ice blocks – each delivery is time critical.
1930
After four years on his own, Reg enters into a partnership with Roderick Menzies and so begins the firm, Amezdroz & Menzies, which is based in Bromfield St, Colac. The establishment of the new company is recorded in the Melbourne newspapers in March 1931. 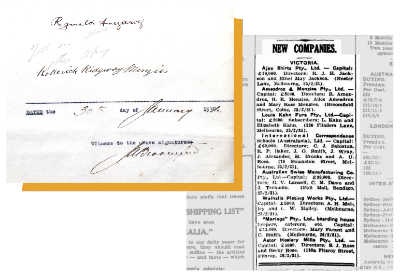 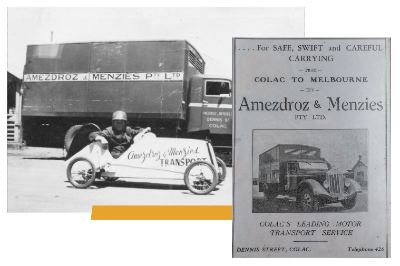 1930s
The fledgling business of Amezdroz & Menzies is on its way. Over time, as its fleet and reach grows, the company begins to establish itself as a leading carrier in the Western District. It regularly takes out advertisements in the Colac Herald spruiking its service.
1945
Through the war years and beyond, Reg Amezdroz (back row, third from right) is a pillar of the local community in Colac and western Victoria. Active in many community groups and charitable organisations, Reg serves as Mayor of Colac and president of the Rotary Club, among many other civic-minded roles. 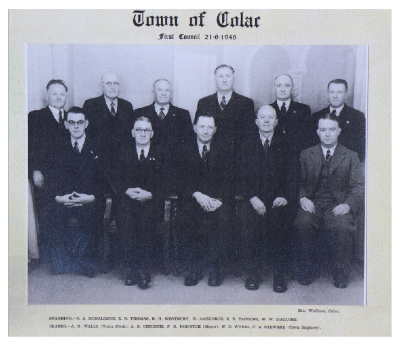 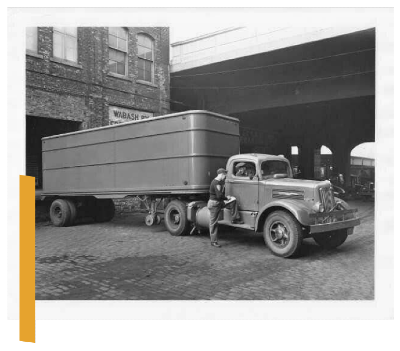 1947
Reg's sons, Ned (Frederick) and Bill, join the company which, by this stage, has grown to a fleet of 10 trucks. Larger vehicles enable A&M to expand its service to the carting of bricks, farm machinery, timber, groceries and hardware – as well as dairy.
1950s
But the one constant through the company’s history – of almost 100 years – is its relationship with another iconic Colac business, Bulla Dairy, a partnership which is still going strong today. 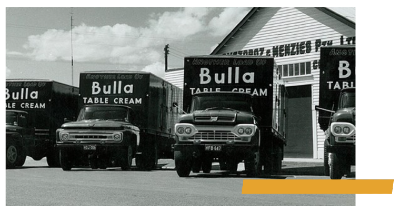 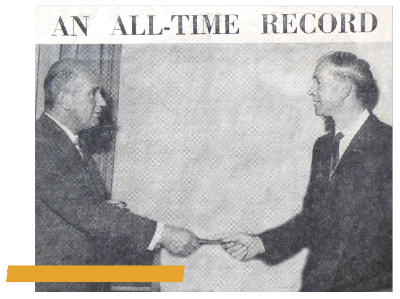 1960
Ned Amezdroz (right) and his brother, Bill, take over the company from their father. Ned is the no-nonsense businessman who looks after the day-to-day running of the operation; Bill, the community-minded JP who acts as a kind of company ambassador.
1963
It takes 40 years but Amezdroz & Menzies finally purchases its first refrigerated van. It is to be the first of many as perishable goods remain an essential part of the company's freight operation. 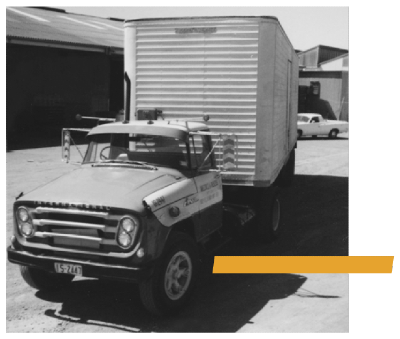 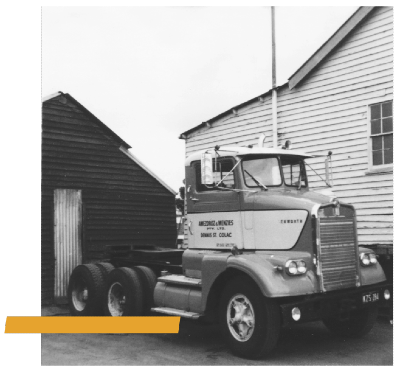 1967
The first Kenworth prime mover joins the fleet. The purchase of the prime movers allows for significantly larger delivery loads – which improves the efficiency and profitability of the business.
1975
To get around unwieldy government rules designed to protect the railways, which prevents transport companies from carting freight intra-state, Ned and Bill set up a 'border-hopping' business. This is called Almega Freightlines and is 'based' at a depot on the NSW side of the Murray River in Moama. A truck (Amezdroz & Menzies) would leave Colac for Moama, another truck (Almega Freightlines) would depart Melbourne with general freight. Drivers would meet at the Moama 'depot', a vacant block of land with a solitary sign 'Almega Freightlines Pty Ltd', swap trailers and then return to their respective bases (Colac and Melbourne). Eventually, after a protracted legal battle, the government deregulates freight for road transport – a breakthrough for the industry which owes much to the efforts of Ned and Bill Amezdroz. 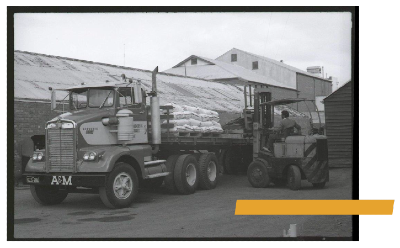 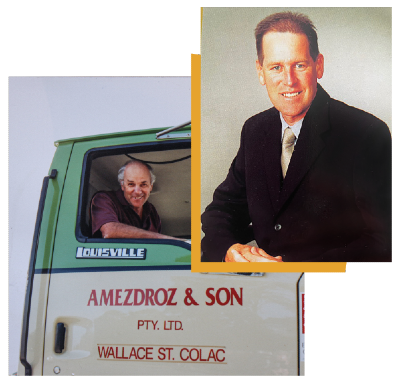 1983
Ned's son, Brett, joins the business after graduating with a Business Transport Economics degree from RMIT and Amezdroz & Menzies changes its name to Amezdroz & Son. One of the company's longest-serving drivers, 'Flash' Gordon, is pictured here about to set off in a newly re-named truck.
1990
Ned retires and Brett takes over the business, immediately modernising aspects of the operation, setting out long-term goals, improving efficiencies and buying out competitors such as M&F Brunt and Nelson's Transport. Over time, A&S would make several other important acquisitions, including Geelong Liquor Warehouse (2003), Renfrey's Transport (2005) and Rodon Transport (2014). 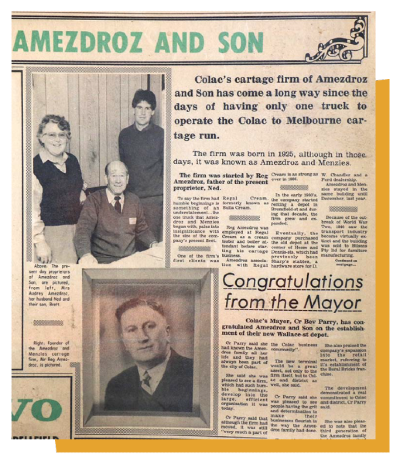 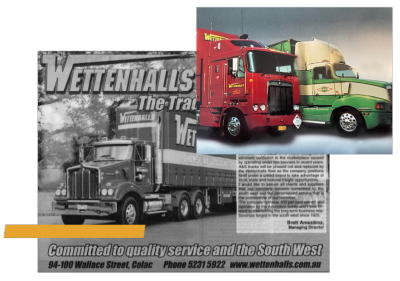 1997
Amezdroz and Son purchases another carrier, Wettenhalls. Because Wettenhalls' name is better known nationally, Brett decides to rename the company … and the distinctive cream-and-green livery of A&M gives way to the red of Wettenhalls. Advertisements are taken out in local newspapers to explain the change.
2002
Wettenhalls begins working for Goodman Fielder Baking (Sunicrust/Wonder White), providing linehaul services between Goodman Fielder's Clayton bakery and Geelong, Colac and Warrnambool. Three years later, that GF contract is expanded to include all of regional Victoria. 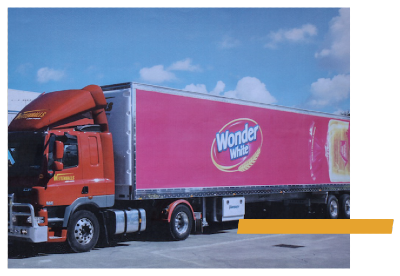 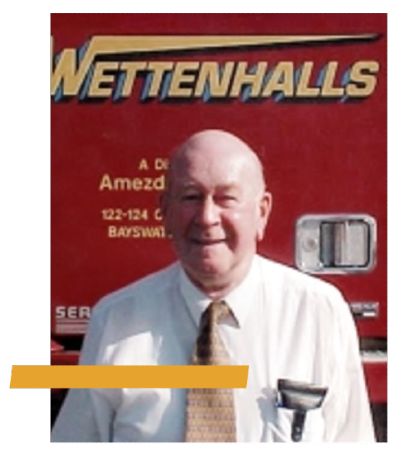 2005
Ned Amezdroz is inducted into the national Road Transport Hall of Fame, his citation reading: “Under the leadership of Ned, Amezdroz & son flourished and became one of the leading carriers in the western Victoria district. In recent years the business has established itself as a leading logistics provider along the eastern seaboard ...”
2017
The company launches an Environmental Services division, which is focussed on the carting of waste and recyclable materials. Cleanaway becomes its first customer in 2017 with a green-waste contract; similar deals soon follow with Veolia, Bingo, Visy and Suez, among others. 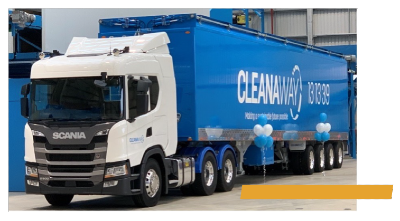 2018
A new division of the company, WRX (Wettenhalls Regional Express), is set up. This represents a move into Less Than Truckload (LTL) palletised freight – where a single or small number of pallets might be transported for several customers rather than having a truck filled by one customer. The service operates within a 500km radius of Melbourne and includes regional centres such as Mt Gambier and Wagga Wagga.
2020
Wettenhalls Regional Express moves into its new “state of the art depot” in Harcourt Rd, Altona, featuring an integrated cross dock and warehouse facility with a modern workshop. The company now operates from depots in Colac, Norlane, Altona, Horsham and Benalla. 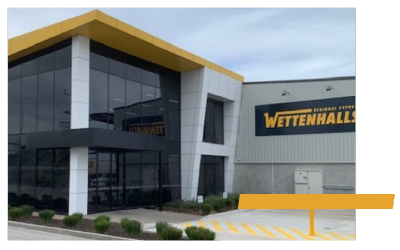 WETTENHALLS HAS GROWN TO BECOME ONE OF VICTORIA'S LEADING FREIGHT AND LOGISTICS COMPANIES.
It now employs 369 staff, boasts a fleet of 172 trucks and its Australia-wide network of operations stretches as far as Cairns in the north to Geelong in the south and Mount Gambier in the west – a huge enterprise that all began with Reg Amezdroz's single truck a century ago.

Find out how WETTENHALLS can help you to grow your business using efficient and advanced services.

We've delivered for many of Australia's leading brands over the years – make yours next.

We’ve carried some of Australia’s most trusted brands over the years – let's make your company next.